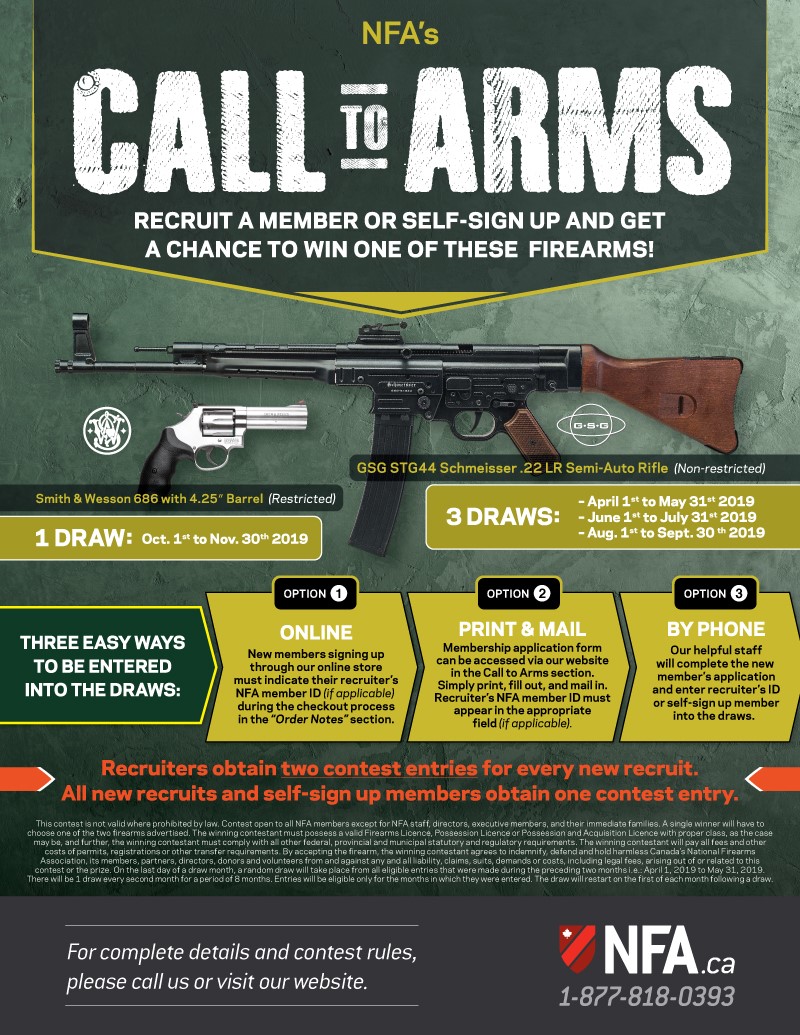 The Call to Arms (the “Contest”) begins April 1, 2019 and ends on November 31, 2019 (the “Contest Period”). The contest is a bi-monthly draw where a prize will be won every second month for 8 months. The deadline for receiving Contest entries will be the last day of May, July, September and November respectively (the “Entry Deadlines”). The Contest is sponsored by Canada’s National Firearms Association (the “Contest Sponsor”). Entry in the Contest constitutes acceptance of the terms, conditions and provisions set out below.

1.1 The owner of an active membership (regular, family, senior) may recruit a new member that is not already a member of the NFA or has not renewed his or her membership in the past 5 years. Recruiters obtain two contest entries for every new member recruited and the recruited member will obtain one contest entry. There is no limit on the number of entries per recruiter and the recruiter may recruit throughout the contest.

2.1 The Prizes consist of the following:

i. GSG STG 44 Schmeisser .22 LR Semi-Auto Rifle will be awarded for each of the draw months of May, July and September;

ii. Smith & Wesson 686 with 4.25″ Barrel with a Kydex CCW holster will be awarded for the draw month of November;

iii. The foregoing are hereinafter referred to jointly and severally as “the Prize”.

On the last day of a draw month a random draw will take place from all eligible entries that were made during the preceding two months i.e.: April 1, 2019 to May 31, 2019. There will be 1 draw every second month for a period of 8 months. Entries will be eligible only for the months in which they were entered. The draw will restart on the first of each month following a draw. Odds of an entry being selected depend on the number of eligible entries.  The selected entrant will be notified by telephone and three attempts will be made to contact the selected entrant.  If a selected entrant cannot be contacted in the manner described above, or if a selected entrant is not eligible or otherwise does not comply with the contest rules, their entry will be declared void and a further entry will be randomly selected.

(a) to sign and return a release of liability releasing the Contest Sponsor, its affiliates and subsidiaries, advertising and promotional agencies, any judge or judges appointed by the Contest  Sponsor, and in each case their respective directors, officers, owners, employees, agents, representatives, successors and assigns, from any liability in connection with the Contest or the acceptance, possession or use of the Prize; and

4.5 Four Prizes will be awarded.

4.6 The identity of the Contest Winner may be obtained by sending a self-addressed stamped envelope, during the one year period commencing one month following the completion of the Contest Period to:

4.8 Persons found to be tampering with or abusing any aspect of the Contest, as determined in the sole discretion of the Contest Sponsor, will be disqualified.

(c) to make available to you from time to time information, promotional material and other material which may be of interest to you.

(a)any cost, liability, expense, injury, damage or claim of any kind, arising in connection with the Contest or resulting from acceptance, possession or use of any Prize including, without

limitation, personal injury, death, and property damage, and claims based on publicity rights, defamation, or invasion of privacy; or