It is possible that you may be subjected to a court process in which the Crown prosecutor is trying to persuade the judge to issue a court order revoking your licence and registration certificates.  If this is the type of case you are fighting, ignore references to a “reference hearing” in this paper.  However, the arguments are valid for that type of case also.

The grounds for refusing to issue or revoking a licencing document are:

The legitimate reasons for coming to that conclusion include conviction or discharge under CC s. 736, within the previous five years, of any offence:

1.  in the commission of which violence against another person was used, threatened or attempted [FA s. 5(2)(a)(i)];

Refusal or revocation can also be based on treatment for a mental illness, whether in a hospital, mental institute, psychiatric clinic or otherwise, as in inpatient or as an outpatient, if and only if the treatment was for a condition that “was associated with violence, or threatened or attempted violence” on the part of the holder or applicant against any other person [FA s. 5(2(b)].

Refusal or revocation can also be based on “a history of behaviour that includes violence or threatened or attempted violence” on the part of the holder or applicant against any person [FA s. 5(2)(c)].

There is an exception to those rules, covering refusal only; they may be ignored by any person with the power to refuse, and by a provincial court judge, when the holder or applicant is over eighteenand does not reside in Canada and is applying for a sixty-day temporary licence to possess a non-restricted firearm in Canada [FA s. 5(3)].

The responsible person who refuses or revokes must do it in writing [FA s. 72(1)].  A voice on the telephone cannot do either of those things, so any firearms control bureaucrat who tries to do that should be told that he is exceeding his authority under FA s. 72, and that you will wait for his refusal or revocation to be delivered to you in writing, as the law requires.

In the envelope that you get, the responsible person must tell you the reason why he is doing it, and send you a copy of FA s. 74 to 81, which is the appeal procedure [FA s. 72(2)].  He does not have to send you a copy of FA s. 72, and that is a pity.  FA s. 72 is very important, as you will see from the subsections of it cited above and below.  It forms a vital part of this process.

The responsible person must also specify a reasonable period of time during which you “may deliver to a peace officer (oddly enough, that term includes the reeve of your village) or  firearms officer or a chief firearms officer or otherwise lawfully dispose of any firearm, prohibited weapon, restricted weapon, prohibited device, or prohibited ammunition” that you have in your possession at the time of the refusal or revocation [FA s. 72(4) and (5)].

If you refer the matter to a provincial court judge within the 30-day time limit [FA s. 74(2)] after getting your letter, the whole process goes on “hold.”  The 30-day time period (or whatever period was specified) for “lawfully disposing of” your items stops being in force.  Your exemption to charges under CC s. 91, 92 and/or 112 automatically extends.

Once the matter has been referred to a judge, the period resets to zero and does not begin again “until the reference is finally disposed of” [FA s. 72(4)].  That means that everything is on hold for the period taken by the reference to the provincial court judge, the delay before the hearing, and the appeal to a Superior Court [FA s. 78], perhaps all the way to the Supreme Court of Canada.   The time involved in that “hold” can be very long.

It is very important to understand the effects that FA s. 72 will have on your case, so you should draw your lawyer’s attention to them.  Do not assume that your lawyer will find them, because most lawyers go immediately to the appeal procedure itself [FA s. 74 to 81], and concentrate all of their efforts in those narrow limits.  The limits and conditions set by s. 72 are often missed.

That is a very curious provision.  The defective computer programs used by the Registrar and the Chief Firearms Officers do not allow firearms to be registered for two or more uses, so the applicant is blocked from making an accurate application.  He may be trying to apply for registration of a firearm for the purposes of collection and target shooting, but he cannot — because the defective program will not accept two uses, so the clerk entering the data usually chooses one at random.

You must refer the matter to a provincial court judge “within thirty days after receiving [the written] notice” [FA s. 74(2)].

On receiving your  reference, “the provincial court judge shall fix a date for the hearing and direct that” all interested parties (you, the Chief Firearms Officer, Registrar and/or Provincial Minister) be notified [FA s. 75(1)].

At the hearing itself, “the provincial court judge shall hear all relevant evidence presented by, or on behalf of, the chief firearms officer, Registrar, or provincial minister and the applicant or holder” [FA s. 75(2)].

Under the old law, there was no requirement for the judge to hear “all relevant evidence.”  As a result, such cases were seen as a form of judicial review, and not as a hearing de novo.  Often, the judge would decide the case on the basis of, “What did the person who refused or revoked know, and was his decision reasonable based on what he knew?”   There was often no opportunity for the “applicant or holder” to enter new evidence.

Under the current law, the requirement that “the provincial court judge shall hear all relevant evidence presented by, or on behalf of, the chief firearms officer, Registrar, or provincial minister and the applicant or holder” indicates that the new law is setting up a hearing de novo, in which the judge must listen to any evidence that the “applicant or holder” wishes to enter.

The judge is therefore apparently perfectly free to make his own decision, based on the totality of the evidence and the balance of probabilities.  He may order the person who refused to issue to issue the refused document, or tell the person who revoked that the revoked document is no longer revoked, but has come back into force.

Because this is a hearing and not a criminal case, the standard of proof is “the balance of probabilities” and not “proof beyond a reasonable doubt”.

Because this is a hearing and not a criminal case, the standard of evidence is relaxed.  Hearsay evidence can be entered and considered, but hearsay carries a lower degree of force than first-hand evidence, and that is a matter that should be mentioned when it is offered in court.

If the “applicant or holder” does not show up on the day of the hearing, the judge may hear and decide the case anyway [FA s. 75(4)].

The provincial court judge may, by a court Order, (a) confirm the decision to refuse or revoke, (b) direct that the document applied for be issued, or (c) cancel the revocation or decision made by the person who revoked or refused a licensing document [FA s. 76].

If no such court Order is made, it is not unknown for the person who refused to continue to refuse to issue, or to refuse to return the again-valid licencing document.  This is an important point in this type of case, and should not be missed.

If the referral to the provincial court judge produces a result that offends the applicant or holder, he may appeal the decision to a superior court, up to and including the Supreme Court of Canada [FA s. 77(1)].

If the referral to the provincial court judge produces a result that offends the chief firearms officer, Registrar or provincial minister, the Attorney General of Canada may appeal the decision to a superior court, up to and including the Supreme Court of Canada [FA s. 77(2)(a)].

If the referral to the provincial court judge produces any other type of result that offends, the Attorney General of the province may appeal the decision to a superior court, up to and including the Supreme Court of Canada [FA s. 77(2)(b)].

An appeal upwards into a superior court must be made within 30 days of the lower court’s Order being made [FA s. 78(1)].

A notice of appeal must set out the grounds for the appeal and possibly further material required by the superior court [FA s. 78(3)].

The notice of appeal must be served on all the interested parties within 14 days of the filing of that notice with the court [FA s. 78(4)].

The superior court may make the same kinds of court Order that the provincial court judge may make [FA s. 79(1)].

An appeal to the court of appeal against the decision of the superior court can only be made on a point of law alone [FA s. 80].

Having said all that, there are other ways to lose or be refused one of those licencing documents.  We will now look at some of those.

Under FA s. 70, “a chief firearms officer who issues a licence, authorization to carry or authorization to transport may revoke it for any good and sufficient reason.”  That is unacceptably broad, as you will see in LawClass 9, “Licences.”

The same flaw is present in FA s. 71, which authorizes the Registrar “to revoke a registration certificate for any good and sufficient reason.”  The flaws are dealt with more fully in LawClass 9, but the main fault is that vague language of that type can easily result in a revocation because the holder of the licencing document is black, female, and/or Jewish.

In another area, CC s. 515 requires a justice in any case where “an accused is charged with (a) an offence in which violence against a person was used, threatened or attempted, or (b) an offence under [CC s.] 264 (criminal harassment), (c) an offence [of trafficking in drugs or possession for the purpose of trafficking], or (d) an offence that involves, or the subject matter of which is, a firearm, a cross-bow, a prohibited weapon, a restricted weapon, a prohibited device, ammunition, prohibited ammunition, or an explosive substance” to add to his order for the release of the accused a condition prohibiting the accused from possessing any and all of those things “until the accused is dealt with according to law unless the justice considers that such a condition is not required… [CC s. 515(4.1)].”

Where the justice does make such an order, he must specify “the manner and method by which (a)  the things [see list] shall be surrendered, disposed of, detained, stored or dealt with; and (b) the authorizations, licences and registration certificates held by the person shall be surrendered [CC s 515(4.11)].”

Where a justice decides not to add the “condition prohibiting the accused form possessing” any and all of those things, he “shall include in the record a statement of the reasons for not adding the condition” [CC s. 515(4.12)].

It is unclear whether the “condition” is a “prohibition order,” but it probably is not — under the statutory rule that “the specific overrides the general.”  The wording of CC s. 515 is clear and complete, and therefore is apparently a different case to that described in CC s. 116.

An argument can be made that the “condition” imposed by the use of CC 515(4.1) is arbitrary, routine, and imposed without due consideration of the particular facts in the case, and therefore an appeal route is necessary to prevent the statute from being voided for overbreadth. 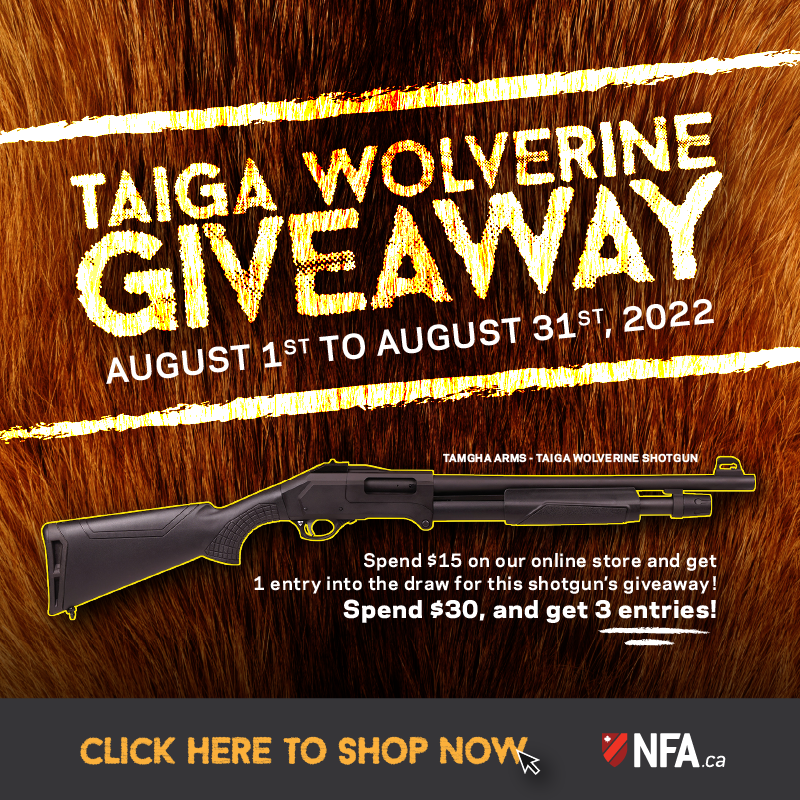