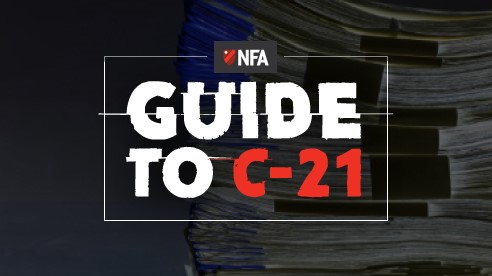 Bill C-21 was introduced in the House of Commons on February 16, 2021.  The Bill is essentially a series of amendments to existing laws, most importantly the Criminal code and the Firearms Act, and, to a much lesser extent, other federal legislation.

Here is an overview:

The maximum sentence for the offences listed hereafter (when prosecuted by indictment) is increased from 10 years to 14 years:

Possession of a magazine exceeding the prescribed maximum capacity was already illegal.  A person who modifies a magazine now commits two separate offences instead of one.

Some airguns become “prohibited devices” for transfer and other specific purposes

Air guns that are currently exempt from licensing and registration requirements, because they do not meet muzzle energy or velocity thresholds (e.g.CO2 powered pistols) will be reclassified as prohibited devices for transfer purposes, if they are identical to or closely resemble modern firearms that are subject to licensing. Current owners will apparently be allowed to keep them, but they will not be allowed to transfer them to third parties.  The loss (or finding) of such an air gun will have to be reported, failing which the owner becomes liable to criminal prosecution.

The bill allows any person to make an ex parte (i.e., without prior notification to the person concerned) application to a provincial court judge to obtain a temporary firearms prohibition order, valid for 30 days.  In essence, this change allows a person with safety concerns to bypass the police and go straight to court.  Upon service of the order by a police officer, firearms will be seized, pending the outcome of a hearing for a longer-term prohibition order.  There is huge potential for malicious use of these provisions, especially in the context of domestic and other disputes.  This will also be an additional burden on an already backlogged court system.

Firearms that were prohibited pursuant to the May 1, 2020 Order in Council.

Although the Government says their so-called  “buy-back” is still in the plans, the bill does not address the so-called “buy-back”, or the indemnities to be paid.

The bill purports to repeal the provisions of the Firearms Act that provide for grandfathering with limited usage (i.e., paragraphs 12(8) and (9)).  Instead, it provides for “storage” only grandfathering.  In other words, existing owners will be given the option to keep their prohibited firearms, solely as collection items, and without possibility of use, sale, transfer, gift, or acquiring other firearms of the same class.  There will also be ongoing compliance requirements.

Other firearms that may in the future be re-classified as prohibited by way of regulations will be subject to the same rules.  This is the evergreen clause that the Liberals have been alluding to.

Authorizations to Carry Handguns for the protection of life

The authority to issue ATCs for the protection of life is being taken away from provincial Chief Firearms Officers and granted to the Commissioner of Firearms (the RCMP).  This is likely in response that certain provinces such as Alberta, who have recently appointed a gun owner friendly CFO, might be tempted to issue those ATCs.  At last count, there was only one such ATC issued in all of Canada, for the protection of life.
Chief Firearms Officers retain jurisdiction to issue ATCs in connection with professional purposes (e.g. trappers, security guards, prospectors)

A person (other than a non-resident) entering Canada with ammunition will be required to exhibit a valid firearms licence.

Municipal prohibitions on storage of handguns

The Bill recognizes that municipalities may enact by-laws that prohibit the storage of handguns.  However, it does not grant them the power to do so.  Municipalities are creatures of the provinces.  That power will necessarily come from the provincial legislation that they are subject to.

Should municipalities enact such by-laws and to the extent that those municipalities notify the Federal Public Safety Minister, licensed gun owners will be required to comply.  There will be a 180-day phase-in period.  After that, for affected gun owners, storage of handguns will only be allowed at authorized central storage facilities.  Transportation of handguns to and from a location within one of those municipalities will not be authorized.  Ranges located within a municipality that has enacted such a by-law will likely be forced to offer centralized storage services in order to remain in operation.

Collectors will be likely affected, as they will no longer be able to store their collection of handguns at their place of residence, should the municipality they live in pass such a by-law.

The apparent rationale for this new scheme is that the Government considers that handguns are at too high a risk to be stolen if they are stored at home.

Chief Firearms Officers will be granted the power to suspend firearms licenses.  A suspension can be for such period of time as the CFO determines.  While a license is suspended, usage and acquisition of firearms, ammunition is prohibited.  The targeted licensee will not be required to surrender or dispose of their firearms, unless the license is subsequently revoked.

The decision to suspend a license does not appear to be challengeable under s. 74 of the Firearms Act.

Surrender of firearms while license revocation/non-renewal is being challenged.

No firearms advertising may depict, counsel or promote violence against persons.  This prohibition might encompass any advertising promoting self-defence and, potentially, some tactical sports.

The Government is granting itself new powers to enact storage regulations that are specific to handguns.  Based upon earlier statements and Minister mandate letters, it is expected that safes or vaults will become mandatory.  That power will also apply to the required specifications for central storage facilities.